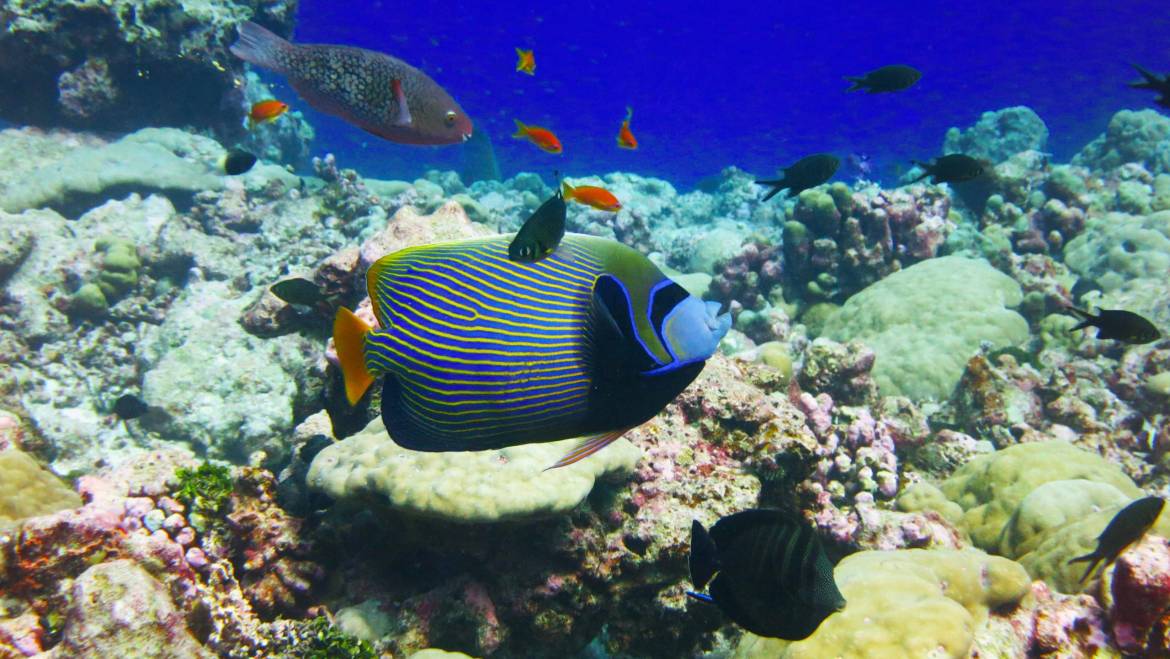 From Nature Ecology and Evolution, 19 May 2020 by Casey Benkwitt

How does biodiversity influence ecosystem function? This seemingly simple question has fuelled a large body of research, and is becoming even more relevant as the threats to both diversity and ecosystem function continue to increase.

One day in March 2019, I awoke on a ship in the middle of the Indian Ocean with the intention of contributing answers to the aforementioned question, only to come to a different question: “Why is there a picture of a burnt car in my inbox?” These two apparently unrelated questions turned out to be closely linked.

One key to our new paper is that we observed patterns of biodiversity and ecosystem function on remote coral reefs. Although this point is a relatively small part of the manuscript, contained within that one word, remote, is countless hours of logistics, travel, and data collection. In fact, it’s the only reason this study was even possible. However, that word, remote, also made it impossible to deal with that pesky burnt car.

It’s typically somewhere between difficult and impossible to isolate human-caused stressors in ‘natural systems’, which explains why most studies testing multi-stressor effects on biodiversity-ecosystem function (BEF) relationships have been conducted in the lab. But, by conducting research on remote reefs far from most human influences, we realised we had a unique opportunity to isolate the effects of two pervasive stressors on BEF relationships in the real world.

Half of our studied reefs were near islands with abundant seabirds, which provide nutrients to the reefs as guano (poo). This poo is so important to healthy reefs that, after biodiversity, the presence of seabirds was the strongest predictor of reef fish biomass. Unfortunately, invasive rats have decimated seabird populations in nearly all of the world’s island chains, including on islands near the other half of the reefs that we studied. After visiting the islands in person, it’s no surprise that rats have such a strong negative influence on coral reefs. The difference between rat-free versus rat-infested islands is like night and day – while the rat-infested islands seem eerily empty, rat-free islands are filled with a cacophony of sounds (and smells) from the nesting seabirds.

The second stressor we studied was a climate-induced bleaching event. We found that the number of fish species on the reefs fell by 17% within just 4 years of an extreme marine heatwave. Due to the strong relationship between biodiversity and ecosystem function, this loss of diversity triggered subsequent losses of biomass and productivity.

Like coral reefs, cars are also prone to extreme heat. Hence, when a carport on the other side of the world caught fire, very little of my beloved car remained (as evidenced by the aforementioned picture in my inbox). Thankfully no one was hurt, but the reality of being thousands of miles from home, unable to help, was real. So, this paper is dedicated in part to the memory of my 2016 Honda Fit, and also to my partner who spent countless hours dealing with insurance agents while I was happily counting fish and corals on remote reefs.

Behind this paper are individuals dealing not only with car fires, but also with the metaphorical fires that inevitably arise when coordinating the logistics of remote fieldwork. As part of the Bertarelli Programme in Marine Science, we’re lucky enough to have extensive support from program coordinators who work tirelessly to facilitate our research.

The end result is that lessons from remote areas help us better understand all ecosystems worldwide. One main takeaway from our paper is that while biodiversity is clearly important to well-functioning ecosystems, biodiversity conservation alone may not be enough if underlying stressors are not reduced. Hopefully we can act on these lessons, in which case the loss of my car will not have been in vain.