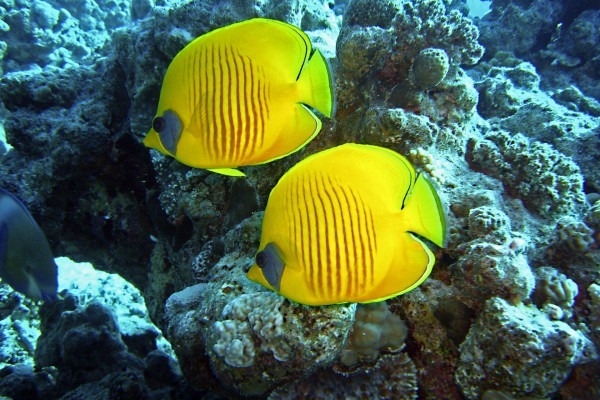 In 2016 there was an unexpected and unprecedented mass bleaching of the coral reefs around the world due to rising sea temperatures leading to losing huge amounts of our coral reefs. Coincidentally, at this time, a team of researchers were in the process of studying butterfly fish who are sensitive to changes in the reef. The timing meant that they were able to determine the effect of coral bleaching on these reef inhabitants. Tamsin Bell spoke with Dr Sally Keith from Lancaster University who explores how aquatic species respond to environmental change by studying fishy behaviour in coral reefs. Sally, who led the research, started by explaining the process of coral bleaching…

Sally – The water gets too hot and the corals expel the algae that live inside them, and this is what makes them turn a white colour, so it’s called bleaching because the corals go white. And this doesn’t mean they’re dead at that point so sometimes they can recover if the temperatures are not high for too long but, unfortunately, sometimes it can also cause them to die. And this one in 2016 was the biggest one in recorded history and we had very high coral death after that event.

What we wanted to look at was specifically butterfly fishes. They’re very brightly coloured fish that eat corals so they’re very very dependent on the health of the reef, and we wanted to understand how their behaviour was changing in response to environmental change.

Tamsin – How have you been studying these fish?

Sally – I’ve spent a lot of time underwater for the last few years watching fish. About 600 hours across 17 different reefs in the central Indo-Pacific region. We’re generally on snorkel with a clipboard and a bit of waterproof paper and a pencil, and we watch a fish for five minutes and we record any other fish that are also butterfly fish that come within one metre of it. At that point we say that there’s been an encounter, and we got a total of 5,259 encounters recorded between individuals, and that was across 38 different species of fish.

Now that encounter can go one of two ways; either they don’t care that the other one’s there so it’s passive, there’s no response, or they can get very very angry and chase the other individual away and so that indicates aggression. And the reason they do that is because they’re defending their corals that they want to eat in their territory from this other individual.

Tamsin – I see. So from all this work you’ve done, what have you found?

Sally – Before bleaching happened, when we were watching these fish 15 percent of their interactions were aggressive, so fairly often they ended up chasing each other when they came into contact. But after the bleaching, we had a two thirds decrease in aggression, so it was only every 1 in 20 times they met each other that they chased. And what we think has happened is that because the most nutritious corals are gone first, they’ve gone past the point of being ‘hangry’ so, originally, when the resource starts to reduce they get more aggressive. They’ve gone past that point now, where there’s so little for them to eat that they just don’t have the energy to invest in fighting.

Tamsin – Oh wow! So they just can’t be bothered?

Tamsin – So what implications does this have?

Sally – It’s really demonstrating a sort of intermediate mechanism. So we know that after about 5 years or 7 years after bleaching we tend to have fewer fish individuals on a reef, but we don’t really know the process of how that happens, and so it seems like this change in behaviour might indicate to us what’s going on. And so, if they don’t have the energy to invest in fighting, and that’s because they’re eating a less nutritious diet, it means either they might end up starving over time because they’ve got enough food to keep going for a little while but not to

The other possibility is that, although they’ve got enough energy to survive themselves, they don’t have enough energy to produce the next generation of fish. And because these fish have quite a short lifespan that might explain why we have this time lag, so it’s really trying to get at the underlying mechanism that’s driving the ultimate reduction in fish numbers.

We study coral Reef Environments, their Ecology, Function & connections with Society, based @LancsUniLEC in the UK. https://t.co/FYBRRiGO45

How do you share your research during a #lockdown? If you're @ENVISIONDTP PhD researcher Rachel Gunn @RachelGunn5 you get yourself on BBC wildlife presenter @PatrickAryee's #WildAndLive series!
Rachel tells us all about it ↘️
https://www.lancaster.ac.uk/lec/about-us/blogs/wild-and-live-virtual-outreach-during-lockdown

2 major human-caused stressors did not alter these relationships🙂
...but they reduced function in other ways🙁