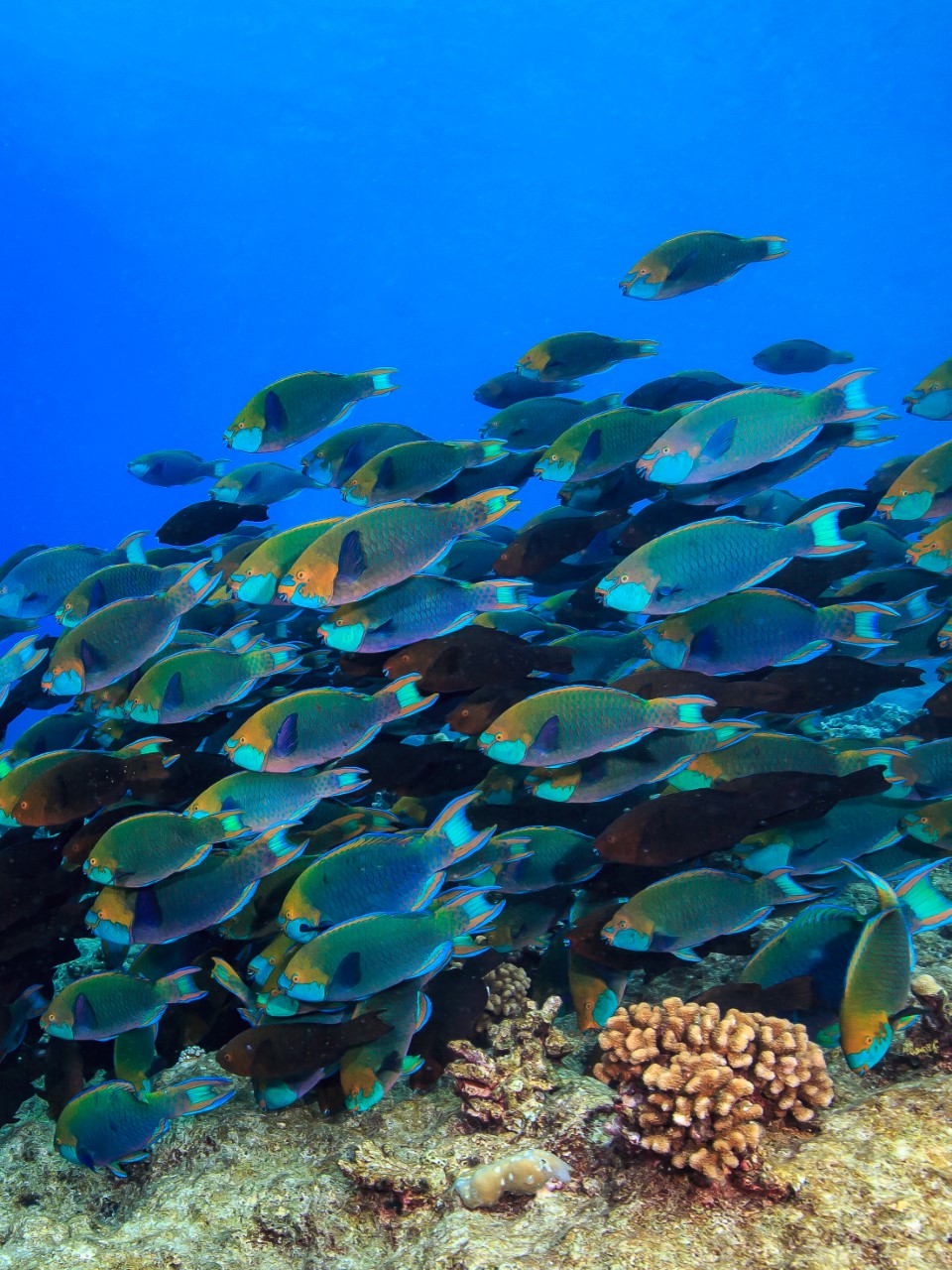 What’s your paper about?

Our paper is about measuring bottom-up and top-down drivers of the ecosystem process of herbivory on coral reefs across large spatial scales. We show how fishing pressure (top-down) and reef condition (bottom-up) influence the rates at which two major herbivorous fish groups graze on algae. We also show how grazing rates are influenced by both the biomass and size structure of grazer assemblages.

The paper was also a trial of open science research concepts – we used this paper to learn reproducible tools collaboratively, through GitHub. We even created a fully reproducible manuscript file – download this R-Markdown file to read the data, fit statistical models, and create the full manuscript with figures.

What is the background behind your paper?

Herbivory helps corals in retaining their dominance on coral reefs by grazing on one of their main competitors – algae. We have gained a solid understanding of how the biomass of grazing reef fish performing this function varies on large spatial and temporal scales, but lack this understanding for large scale bottom-up and top-down controls on herbivory.

What are the key messages of your article?

Our analysis shows that the herbivory function of croppers (e.g. surgeonfish), which control turf algae, was primarily driven by the bottom-up driver reef condition. Cropping rates were highest on structurally complex reefs with few fleshy macroalgae that typically make the substrate inaccessible. Substrate availability and structural complexity also influenced the herbivory function of scraping fish (which promote coral settlement by clearing substrate) but their primary driver was fishing. Scraping rates were least depleted on remote reefs and unfished reefs. Scrapers, i.e. parrotfish, were most influenced by top-down drivers.

The bottom-up and top-down processes affected the grazers most strongly via their biomass. We were able to show that many small-bodied fishes are more likely to exert more grazing pressure than few large-bodied fish.

Our findings suggest that disturbances that clear substrate for turf algae will likely increase cropping rates in both fished and protected areas, while showing that scraping functions are already impaired on reefs close to human influence, particularly where structural complexity has collapsed. Restoration of this key herbivory function will require scraper biomass to be rebuilt towards wilderness levels.

How did you come up with the idea for it?

James emailed us (a handful of PhD students at Lancaster Environment Centre, UK) last year with his idea to teach us open science tools such as GitHub, and science communication tools such as R-Markdown while working on a short collaborative paper. This way, we could learn how to use tools that would make our science more transparent, learn to work and write collaboratively, and produce a meaningful publication from it. James suggested we could look at variations in grazing functions on coral reefs and what drives them on a large scale. We were lucky that Nick Graham, our supervisor, provided a large dataset covering different geographic regions that he had collected throughout his career. This was a good opportunity to look at what drives herbivory rates at macro-ecological scales.

We thought it was a great idea and were humbled that James would spend his time teaching us these valuable tools to make our science more transparent. We got cracking, learned a tonne, and have been sharing our scripts for publications on GitHub since then. Awesome experience – thanks James!

What is the broader impact of your paper?

Our study highlights the role that integrating data from multiple locations can play in answering substantial, large-scale, collaborative questions. The open-source nature that laid the foundation to our approach allows a reproducibility that can be used when analysing drivers of other vital coral reef ecosystem functions. You can find our project notes, datasets, data exploration, and scripts at our GitHub repository ‘Grazing gradients’. The (clean and easy to read) supplemental data and scripts accompanying our study are at https://github.com/jpwrobinson/grazing-grads.

Our study is amongst a few other recent studies that begin to answer the question of which large-scale factors drive vital processes on coral reefs. Answers to these questions can accelerate the translation from in-field data to management decisions. We began to answer this question for the process of herbivory, specifically for two major herbivorous fish groups, croppers and scrapers. Forming large-scale hypotheses that span across multiple geographic locations required us to integrate multiple reef condition datasets from four Indo-Pacific regions with grazing rates from 72 reefs. This meant we had the opportunity to work with researchers across the globe.

What is the next step in this field going to be?

Marine communities are changing in response to climate change; therefore, large-scale predictions on how ecosystem functions will perform in the future are very valuable. We hope more studies use similar approaches to ours to answer other large-scale questions. An important cornerstone for this approach is the availability of data from multiple geographical sources. Earlier this year, I learnt about how this cornerstone could be consistently provided by a collaboration between the Wildlife Conservation Society, the World Wildlife Fund and Sparkgeo called Marine Ecological Research Management AID (MERMAID, https://datamermaid.org/). This data platform coordinates the collation of data from various sources and accelerate scientific collaboration. If that is not promising enough, it is also open source (https://github.com/data-mermaid).

What is your current position and what are you currently working on?

I am about six months away from finishing my PhD in which I research feedback processes. Basically, cause-and-effect loops on degraded coral reefs. In my PhD, I look at these feedback processes through predictive (1), applied (2), and conceptual lens (3).

First, I focussed on uncovering drivers of juvenile coral density following mass bleaching in the Seychelles. I found which abiotic and biotic drivers were most likely to support and oppose the re-establishing of coral-dominant feedbacks following the 2016 mass bleaching event.

Second, I moved onto weakening macroalgal-reinforcing feedbacks by novel methods of artificial shading and focussed sea urchin grazing. Once weakened, I studied whether the algal-weakening and coral-reinforcing process of herbivory could be reinstated into the manipulated areas.

Third, I conceptually integrated feedbacks with two other frameworks to work from historical social-ecological dynamics between Jamaicans and their coral reefs to fostering future reef sustainability.

What is the best thing about being an ecologist?

I think the combination of various job traits (had to mention traits for Functional Ecology) that being an ecologist brings is unparalleled. You get to think deeply about all the nooks and crannies of natural systems, travel and collaborate with other researchers and solve small hands-on problems on fieldwork. You get to code mathematical models that might explain those nooks and crannies a little bit better, plus write and talk about all of it to your colleagues, students, the public, future funders and many more. On top of all that, you have a lot of freedom to structure and approach your day in a way that works best for you. In addition, the best part: knowing there are more traits to discover. It never gets boring.