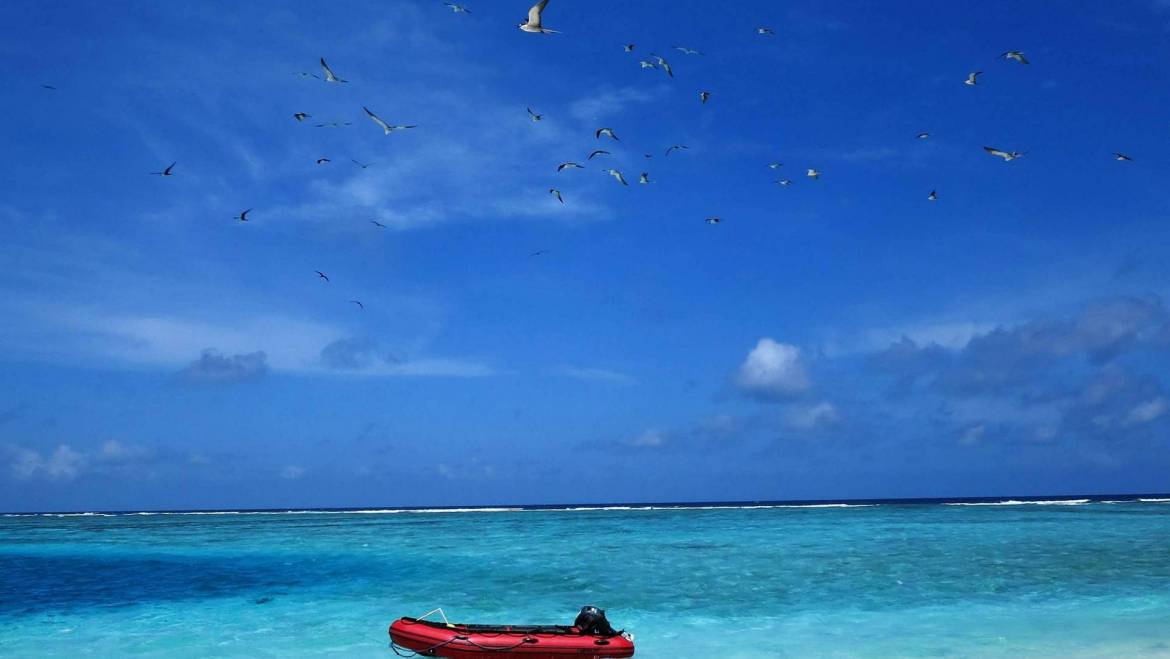 From Anthropocene, 17 July 2019 by Brandon Keim

Coral reefs near islands with thriving seabird colonies may recover more quickly from climate change-induced die-offs, making the protection of these imperiled birds a practical strategy for reef protection, too.

Birds who spend most or all of their lives at sea are among the most imperiled animals around. Their populations have declined by roughly two-thirds since the mid-20th century, making seabird conservation an urgent moral imperative—and perhaps also a practical strategy for people seeking to protect coral reefs from climate change.

A new comparison of reef resilience near islands with and without thriving seabird colonies found that the former may better rebound from bleaching events, when too-warm water temperatures cause corals to expel the algae living inside them. Because corals rely on those algae to survive, many eventually die, and the growing frequency and scale of bleaching events threatens the very future of Earth’s reefs.

Yet seabirds may “promote recovery of these reefs,” write researchers led by Cassandra Benkwitt and Nicholas Graham, both ecologists at Lancaster University, in the journal Global Change Biology. They’re not a magic bullet—but they might help.

Benkwitt and Graham work in the Chagos Archipelago, a series of West Indian Ocean atolls about 300 miles south of the Maldives. Seventeen species of seabirds—among them boobies and shearwaters, noddies and terns—breed on the islands, but the introduction of non-native rats by colonists in the 18th and 19th century decimated their numbers. Some islands are rat-free and seabird-rich, though, making the archipelago ideal for studying the ecological effects of their presence.

In earlier work the researchers documented how the seabirds’ poop, containing nitrogen and phosphorus derived from fish caught at sea, nourish rich, abundant near-shore communities of invertebrates and fish. Lacking those nutrients, reefs around rat-populated islands are comparatively depopulated.

In the latest study, Benkwitt, Graham, and biologist Shaun Wilson from the University of Western Australia surveyed sea life around 12 islands before and shortly after an extreme warming event triggered mass bleaching in 2015 and 2016. Six of the islands have thriving seabird colonies, with population densities of more than 1,200 birds per hectare; the other six have barely two birds per hectare.

Reefs around all the islands were hit hard by the bleaching. Total coral area contracted by about one-third. Afterwards, though, only seabird-rich island reefs experienced dramatic upswings in populations of crustose coralline algae, a type of hard-bodied algae that’s foundational to healthy reef systems.

Both herbivorous and fish-eating fish also fared better around the seabird islands. The former might help keep other, non-reef-building algae at bay; the latter will contribute their own poop, adding nutrients that, together with those delivered by seabirds, should nourish coral polyps as they begin the years-long process of forming new colonies.

“Even though seabird nutrients did not enhance resistance to bleaching,” write Benkwitt and Graham, “they may still promote recovery of these reefs in the coming years, which depends on the growth of remnant colonies and recruitment of new juveniles.”

Seabird colonies and their nutrients can return within a decade or two following the eradication of rats from islands, note the researchers. They say that eliminating historically non-native rats offers a relatively fast, inexpensive route to promoting biodiversity and reef health. “If we restored seabird populations across the worlds’ islands,” says Benkwitt, “it would benefit a significant portion of coastal reefs.”

While non-native rats are especially problematic on islands, where ecological communities evolved in their absence, seabirds face other threats as well. Foremost among them is overfishing; many studies have documented how an industrial-scale appetite for ocean fish has deprived seabirds of their own food. Pollution and habitat destruction also add to the toll, and the mid-20th century baseline against which modern seabird collapses are measured likely represents a figure depleted from pre-industrial times.

Restoring seabird populations may benefit not only coral reefs near islands, but reefs along continental shorelines where seabirds visit. And while this particular study focused on seabirds, the essential principle—that creatures spreading life’s foundational elements across lands and waters make ecosystems more resilient— may apply to many other species and ecological contexts.

“The maintenance of nutrient subsidies,” write Benkwitt and colleagues, “may be important in shaping the response of ecological communities to climate change.”