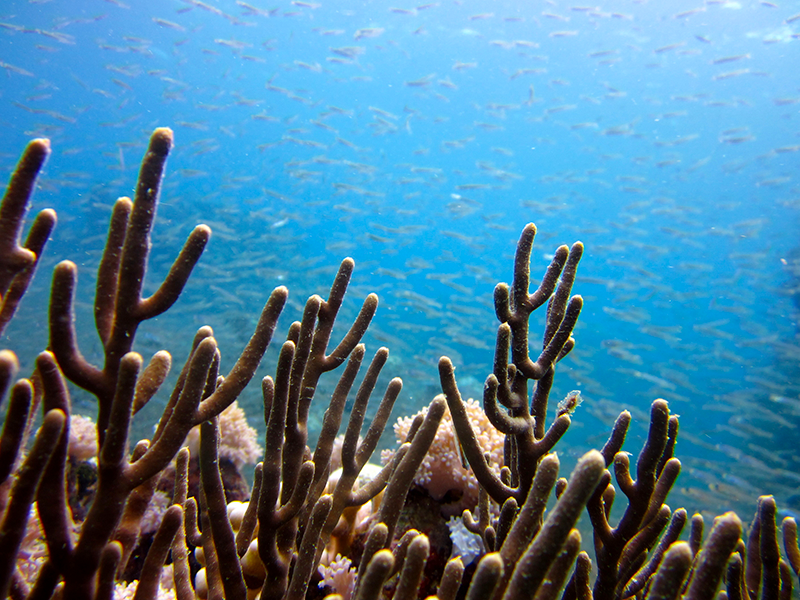 The information should help conservationists to target their efforts to protect the portions of reefs that are most capable of survival, they say.

Previous studies have shown coral reefs as they exist today will be largely wiped out by climate change in the long term, but the new work by an Australian team shows for the first time which reefs in the short term can be expected to bounce back from bleaching events.

A major bleaching event is currently under way in large parts of the North Pacific, including the Marshall Islands and Hawaii, which experts have warned could be on a ‘historic’ scale akin to the record bleaching of 1998 that saw mass coral die-off around the world.

Nicholas Graham, lead author of the study published in Nature on Wednesday, looked at the 1998 bleaching’s impacts on reefs in the Seychelles, and found 12 of 21 sites had recovered afterwards.

Looking at just two of 11 factors – water depth and the physical complexity of the coral – the team were able to use modelling to 98% of the time correctly predict whether a reef would recover or not. Deeper water and a more complex structure made a recovery more likely.

Graham, who works on coral at James Cook University in Australia, told the Guardian that the results bought time for authorities to better manage climate-resilient reefs while bigger picture problems such as greenhouse gas cuts were addressed.

“If emissions continue as they are, the longer term future is likely to still be bleak, even for those recovering at the moment [from bleaching], because the projections are coral bleaching will become more and more frequent. In a way it’s [the study’s findings] buying us time to keep as many reefs in good shape as we can, while we tackle some of these global, bigger issues.”

The study’s findings suggest the parts of the Great Barrier Reef that are still relatively pristine, in the north and further offshore, are also those best placed to recover from bleaching events brought about by global warming.

Graham said the findings also raised concerns about the logic of dumping sediment from planned major port projects to expand coal exports along the Queensland coast, a local impact which could harm coral otherwise capable of surviving the global impacts of climate change.

“If you have these big dredging projects, such as at Abbot Point, if we’re dumping a lot of spoil and sediment into the Great Barrier Reef lagoon, a lot of that will settle in deep water, a lot of which might be coral and a lot of which will do better under climate change. If we’re not actually doing enough to reduce local impacts, we’re doing ourselves a disservice under climate change.”

The research could help organisations such as the reef’s marine park authority to better pinpoint which areas should avoid anchor damage from boats, which reduces physical complexity and thus the ability to recover from bleaching, Graham added. It could also help other coral nations, such as Kenya, to pinpoint where to limit damage by fishing gear.

The research looked at a 17-year data set covering surveys undertaken in 1994, 2005, 2008 and 2011, and looked at eleven factors that influenced their recovery or die-off. The coral’s physical complexity and water depth were the two most important factors – sites deeper than 6.3 metres were found to be highly likely to recover – while whether a reef was in a marine protected area made no difference.

Dr Aaron MacNeil, a co-author on the study from the Australian Institute of Marine Science, said: “This gives reef management a major boost in the face of the threats posed by climate change and, encouragingly, suggests people can take tangible steps to improve the outlook for reefs.

“By carefully managing reefs with conditions that are more likely to recover from climate-induced bleaching, we give them the best possible chance of surviving over the long term, while reduction of local pressures that damage corals and diminish water quality will help to increase the proportion of reefs that can bounce back.”